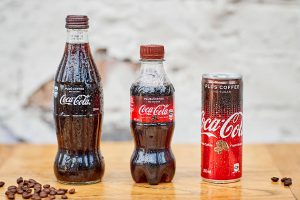 Australians will be the first people in the world to taste CCA’s new Coca-Cola Plus Coffee flavour, available as a limited edition this summer.

“Australians have a love affair with coffee so we thought why not give them more of what they want – the great taste of Coca-Cola with a dash of real coffee from Brazil,” Coca-Cola Australia spokeswoman Lisa Winn said.

Ms Winn said the new flavour will start to roll out to stores this week.

“It’s a fresh take on the delicious taste of Coca-Cola Classic but with the unmistakable aroma of real coffee and some subtle caramel undertones.

“Just like the real thing, the delicious taste of Coca-Cola Plus Coffee is best served icy cold.

“And for those watching their sugar intake the good news is that Coke Plus Coffee is completely sugar free.“

“Coke Ginger was a huge success in Australia and it was inspired by the simple insight that Australians love the taste of ginger drinks. The launch of the new Coke Plus Coffee follows a similar path to market – we know Australians have a love affair with coffee,” she said.

Ms Winn said for many Aussies, it will be a popular alternative to a second cup of coffee in the

“If it sounds like it packs a punch – well it actually has less than half the caffeine of a regular latte or flat white (based on 250ml can) but a little more than Classic Coca-Cola.

“We think it will be a great tasting afternoon pick me up – like a delicious antidote to the 3pm slump,” said Ms Winn.