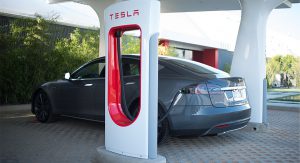 In a recent Fortune article, Mr Straubel said that while they’re waiting, “Drivers want to eat, they want to have a cup of coffee, they want to use the bathroom.”

He said Tesla wants to satisfy those needs by turning Superchargers into full-service rest stops.

Tesla doesn’t usually charge its customers to use the Superchargers so adding coffee and snacks would turn this expense into a revenue generating asset.

Straubel said Tesla isn’t interested in running the convenience stories themselves, instead aiming to partner with experienced operators. Tesla is already partnering with restaurants to install either lower-power chargers or Superchargers in their parking lots.