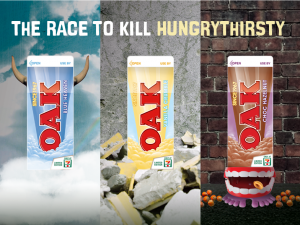 OAK is giving its fans the chance to decide on the next flavour that is released in the ‘The Race to Kill HungryThirsty’.

Exclusive to 7-Eleven, the newest OAK beverage will be decided by fans of OAK in an online race.

The online race will take place on 17 August at 4 pm, as fans vote via a Facebook Live Video slot car race for their preferred flavour from a choice of three- Choc Hazelnut, Blue Heaven and Vanilla Crumble.

Each slot car will be representative of one of the three flavours and will be fuelled to move around the race track by a designated Facebook reaction.

This method will see one flavour crowned as the winner, as the most effective Hungrythirsty killer.

OAK marketing director Angela Burr said: “OAK fans know great taste when it hits them, so we’re excited to give them the chance to make history and let them have a say in deciding what the next OAK 7-Eleven exclusive flavour will be.”

The winning flavour will be stocked exclusively at 7-Eleven stores around Australia from 3 October.