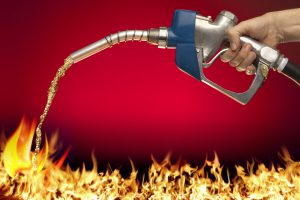 It would only take a spark to set the whole petrol station alight.

In the clip obtained and aired by the news program, the petrol station owner Ron Carrison can be seen pouring petrol from the pump onto his the driveways of his busy highway station.

He is said to clean the driveways with petrol as it is the easiest and most efficient way to remove diesel stains.

Mr Carrison denied the accusations before changing his mind, and taking Mr King to the driveway where he sprayed petrol on the ground and wiped it up with a cloth.

Jack Trevaskis, a teenage employee of Mr Carrison spoke to A Current Affair regarding the issue saying: “You do it or you don’t have a job”.

Mr Trevaskis was one of three teenagers interviewed by the program who had worked for Mr Carrison and been forced to clean the driveways with petrol to remove diesel stains.

When Mr King asked Mr Carrison if it was dangerous what he was going, to which Mr Carrison replied ‘no’.

Glen Trevaskis, Jack’s father is a former police officer and also worked in the bottle shop next to the petrol station.

He said it was a disaster waiting to happen.

“I just can’t believe it hasn’t happened yet. It’s unbelievable,” he said.

The Environmental Protection Agency (EPA) told A Current Affair it had previously warned Mr Carrison about his dangerous behaviour but that it would now re-open its investigation.

An EPA spokesman told A Current Affair: “EPA has previously advised the operator of his obligations. In light of this new vision EPA will be revisiting the matter”.