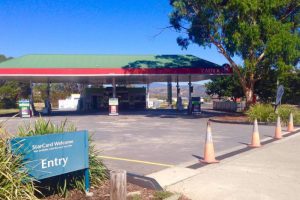 The petrol station where the incident occured. Source: Abc.net.au

A man has suffered burns to his face after using a petrol pump to fill a jerry can in the back of his ute after it caught fire.

Firefighters were called to the petrol station in south Canberra on January 28th, however staff had already managed to put out the fire by the time they had arrived.

The man was tended to by paramedics at the scene before being taken to Canberra Hospital.

ACT Emergency Services Agency representative Leigh Curtis said: “Petrol is extremely volatile liquid, and it will flash quite easily, and it is really important when you’re filling a jerry can to take it out of your vehicle … and place it on the ground where it’s earthed properly”.

“Static electricity can be a problem which can also cause an ignition,” he said.

“It’s a requirement that is shown on all of the signage at petrol stations, and it should be common practice.”

The petrol station was closed for several hours after the incident before firefighters later declared the area safe.