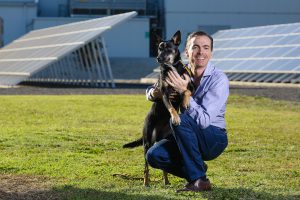 Mars Australia has signed 20-year power-purchase agreements (PPA) with Total Eren to generate the equivalent of 100% of Mars’ electricity from renewable energy by 2020.

Total Eren is developing and will build the Kiamal Solar Farm near Ouyen, Victoria which will be operational in mid-2019. The Mars PPAs will also facilitate the planned build of a second renewable project by Total Eren in NSW.

“Mars is thrilled to be flicking the switch to solar energy,” said Barry O’Sullivan, Mars Australia. “It’s about making a long-term commitment to a sustainable, greener planet that will benefit our customers, our consumers and the local and global community.”

Australia as a nation currently is one of the highest emitters of greenhouse gas per capita in the world, with electricity generation being a major contributor.

Mars, in partnership with Total Eren, will play a role in reducing Australia’s reliance on fossil fuels – the power generated at the Kiamal Solar Farm will be supplied to the national grid, thereby increasing the ratio of renewable energy in the National Energy Market.

Mr O’Sullivan said, “The rise in electricity prices last year accelerated our plans to join Mars sites in the US, UK and 9 other countries in moving to renewable electricity.”

“We acted quickly because the price volatility of energy in Australia made renewables the best option for our business, in addition to getting us closer to our commitment to eliminate greenhouse gasses from our operations by 2040.”

The PPAs are part of a broader Mars journey to become Sustainable in a Generation, with plans to reduce greenhouse gasses across the supply chain by 67% by 2050.

Kevin Rabinovitch, Mars Global VP Sustainability said, “Last year we announced we’re spending a billion dollars in the next three years to start transforming our supply chain to get those impact reductions. We’ve made solid progress on the sustainability of our own operations since 2007, so now we’re in a good position to accelerate work and share lessons with our supply chain partners as we tackle impacts beyond our own operations.”

Mr O’Sullivan added, “We have an extensive local supplier network and we’ll be talking to them about how they can help further reduce emissions in our supply chain.”

Total Eren CEO David Corchia said, “Total Eren has an ambitious vision for the expansion and development of renewable energy in Australia.”

“Partnering with manufacturing thought leaders like Mars Australia is essential and sends a strong message to the rest of the market that now is the time to capitalise on the opportunities offered by renewable power purchase agreements and to drive positive change in the environment.”

Mars does not take energy directly from the solar farm to power its operations. By helping to underwrite a part of the project, Mars provided the security necessary to enable the project developers, Total Eren, to expand the solar farm to a planned Stage 1 capacity of 200 MW. In return, Mars will receive the Renewable Energy Certificates (RECs) created by Kiamal Solar Farm, which are transferable for all Mars’ electricity use in all of its Australian facilities.

Sam Kimmins, Head of RE100, The Climate Group, said, “Investing in solar power is a sound business decision in light of fluctuating energy costs in Australia. By adding renewables capacity and engaging suppliers, leaders like Mars can spur wider corporate action that can shift the local market away from fossil fuels and start bringing down the country’s high emissions.”

TFS Green are pleased to have been able to broker the Kiamal Project to Mars as part of their new corporate PPA services platform – Renewable Energy Hub.