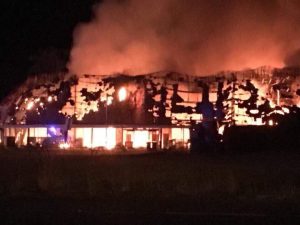 A well known and well loved NSW icon, The Rock Roadhouse on the mid-north coast has gone up and flames.

The NSW Rural Fire Service (RFS) attended the scene with 18 fire trucks to fight the fire.

A spokesperson for the RFS said: “The structure is completely alight and crews are protecting fuel storage facilities on site”.

“There have been no reported injuries,” the spokesperson said.

The site was originally opened in 1990 as Leyland Brothers World with the replica of Uluru and as well as rides, a museum and a student camp.

The camp was still active and was being run as the ‘Great Aussie Bush Camp’ and was evacuated during the fire.

Fire crews fighting the blaze were able to keep the blaze from reaching the fuel tanks at the petrol station on site.