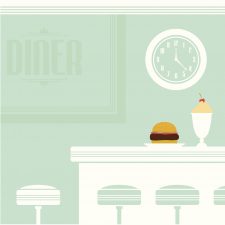 The counter seating a retro diner with a hamburger and milkshake

A landmark milk bar on Parramatta road appears to be stuck in a circle where it is not allowed to open until certain renovations are completed, but the owner doesn’t want to begin renovations until he can reopen the store.

The Olympia milk bar, owned by Nicholas Fotiou was forcefully closed by the Inner West Council in 2017 following a report from police regarding a collapsing awning.

A spokesperson from the Inner West Council told The Sydney Morning Herald (SMH): “Council had no choice but to close the shop until repairs were carried out”.

Mr Fotiou seemingly recognises the problems that need to be mended within the store, he believes he should be able to reopen before having to carry-out any renovations.

The Olympia was open for more than 50 years before its abrupt closure. The building was bought by Mr Fotiou and his brother in 1959.

The SMH reported that while many offers of assistance and support had been offered to Mr Fotiou, it seems as though he has rejected them all.

The spokesperson for the council said: “Unfortunately, Mr Fotiou has refused all these offers of assistance,” she said.

“While council would be keen to further support [him], that support cannot be forced upon him.”

Until one party decides to make a move, a resolution in this unique situation remains to be seen.