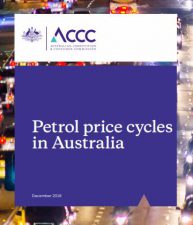 The cover of the ACCCs petrol price cycle report.

The report stated the best time for drivers to purchase fuel is during the lowest point of the price cycle.

The report provides an in-depth look at how price cycles work and how motorists can use them to their advantage.

ACCC Commissioner Mick Keogh said: “While they are not illegal, the retailers’ use of price cycles to maximise profits really infuriates drivers as they can see no reason for them to exist”.

“It’s not uncommon for drivers to notice prices jumping 20 cents or more in a very short period of time, and the price you see being charged on the way to work can be very different to the one on the way home,” Mr Keogh said.

“There’s a common perception that all retailers put their prices up or down at exactly the same time, but our research shows this isn’t the case, so if you see prices going up at one retailer, use an app to find another who hasn’t yet raised their price.

“For drivers who don’t use their cars that often, or drive as far, it is possible to time purchases at the low point of the cycle and pay below what it costs retailers.”

It is estimated that buying at the low point of the cycle could save around $175 in Sydney, $150 in Melbourne and Brisbane, and $200 in Adelaide on a yearly.