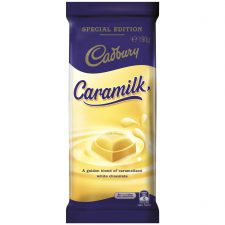 The once popular Cadbury Caramilk chocolate block has been brought back onto shelves in limited supply after a 20-year hiatus.

The sudden resurgence of the chocolate bar has sent customers into a frenzy as the limited edition blocks appear to be selling out quicker than they buy them.

Now the blocks are starting to appear on eBay and are being sold for prices well above their recommended retail price.

Cadbury spokesman Paul Chatfield spoke to News.com.au saying the rush was due to consumer nostalgia and demand.

“Given the demand from Aussie consumers, we’ve now brought a limited quantity to Australian retailers and feedback from the first stores to have the block on shelf is that they’re disappearing fast,” he said.

“Unlike developing an entirely new product, when we bring back an old favourite, we need to ensure we’re delivering a taste experience that matches people’s recollection of the product.

“Often people have a very positive, nostalgic view of a heritage product and the feedback from consumers to date has been that Cadbury Caramilk matches what they enjoyed about the original.”

Mr Chatfield said that all major retailers would be receiving stock this week.

As to whether this beloved treat will make its way into convenience and petrol stations, remains to be seen.

C&I has contacted Mr Chatfield for further comment and is awaiting his response.