Scott Kelly introduces the innovation, SodaStreamMe, to the world in an infomercial style video. SodaStreamMe is an on-the-go bottle that enables you to carbonate your own drink simply by blowing into it, thus releasing your excess CO2. The idea for this fake product is based on very real research about the excess amounts of CO2 in space. SodaStreamMe is supposed to create a cure for people who suffer from excess levels of CO2, causing them to burp. Kelly says it best: “When life gives you gas, make SodaStream”.

The entire video is very scientific and portrays Kelly giving an explanation about the product, in a spaceship, out in space but also at home, casually wearing a spacesuit while reading a book. At the end of the infomercial, the viewer is invited to visit www.SodaStreamMe.com where the prank is revealed in a short video in which Scott Kelly explains burping in space is actually impossible.

“April Fools’ pranks have become a SodaStream tradition,” said Matti Yahav, Chief Marketing Officer at SodaStream. “We took this one to the next level by rooting it in scientific research conducted with a legendary astronaut, making the prank more credible. Unfortunately it’s not real – we can’t solve your gas issues – but with SodaStream you can definitely make sparkling water at the touch of the button while caring for the planet.”

“Excess CO2 is a real issue in space and this could have been a life-saver had it actually existed,” explained Scott Kelly, engineer and former astronaut. “I’m thrilled to partner with SodaStream on this prank because one thing you learn from living in space for as long as I did is you have to have a sense of humor. I hope everyone gets a nice chuckle out of this video, I know I did making it.”

Some other images from the humorous campaign: 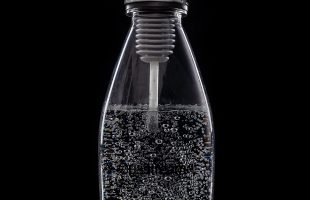