By Lucy Marrett on April 2, 2019 in Non-food Products, Technology 0 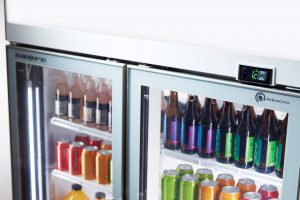 Data on the performance of new SKOPE ActiveCore display fridges purchased in Adelaide late last year have shown that the fridges were unaffected by January’s record-breaking heatwave in the region.

The information was collected automatically by SKOPE-connect, the manufacturer’s new fridge management app.

“On some days the temperature around these fridges was well past the 40-degrees Celsius mark, but the temperature on the display shelves barely wavered. And to put that in context, these are fridges in high use, high traffic front of house areas in pubs and cafes. The doors are constantly being opened and closed.”

SKOPE launched its first generation ActiveCore in 2015. It can sometimes be found on SKOPE’s clearance website – where it is still highly sought-after thanks to its power efficiency and reliability.

However, the second generation of ActiveCore drastically raises the bar.

“The new ActiveCores retain everything from the original, including the price and five-year warranty,” George says.

“And we used a natural refrigerant to achieve even lower running costs with virtually no impact on the environment. But we also added SKOPE-connect.”

“Suffice to say the potential of this technology is enough that many would expect it to be a premium cost feature. Instead, we’ve made it part of the ActiveCore sticker price, which remains the same as it has always been.”