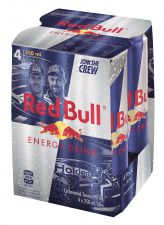 Red Bull is giving consumers the chance to join the Red Bull Holden Racing Team at the Bathurst 1000, supported with new Limited Edition Red Bull packs across all channels nationwide.

Launching in store from 3rd June, fans will be invited to ‘Join the Crew’ by uploading a 10 second video with two to three mates showcasing how they complete a task as a crew.

Red Bull Holden Racing Team will select their winning crew for the race weekends, giving wings to the crew who showcase the most unique skills as a team.

With multiple opportunities to submit entries & weekly merchandise packs throughout the 8-week promotion, there’s plenty of opportunity to gain a podium position.

The ‘Join the Crew’ campaign is focused on the crew that makes the Red Bull Holden Racing Team a successful, functional and vibrant team on and off track. With Supercars’ impressive reach and fanbase, Red Bull is appealing to Red Bull Holden Racing Team’s core fans as well as motorsport fans and particularly blue-collar workers who also rely on their crews to get the job done.

In store activation is key to driving incremental sales. Energy Drinks are highly impulsive. Almost 1 in 3 shoppers purchase from additional displays throughout the store.1

To spark some creativity and learn more about how to enter, head to www.redbull.com/jointhecrew.

These products will be priced in line with the 250mL can and pack Red Bull® Energy Drink range: