By jmhargreaves on September 5, 2019 in Supplier news 0 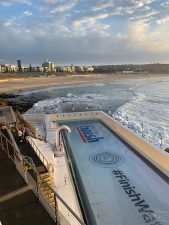 Finish Australia launched its national water-saving campaign, #FinishWaterWaste, in partnership with Rural Aid and National Geographic at the spectacular Bondi Icebergs in Sydney this morning.

The awesome activation featured the Bondi Icebergs swimming pool converted into Australia’s largest kitchen sink, with the iconic Bondi Beach in the distance. The campaign aims to drive awareness of the water scarcity issue in Australia. The campaign is part of the continuing trend for brands to play their part in the sustainability space.