By nwhite on March 5, 2020 in Confectionery, Food, General/grocery, News, Snacks 0 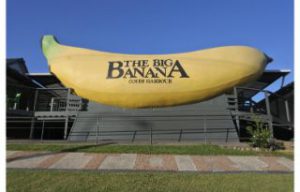 An Allen’s stunt to spread the news about their latest creation certainly captured Coffs Harbour locals’ attention – with a few surprise visitors from the men and women in blue.

Allen’s orchestrated the stunt, organising to have a man dressed in a chef’s outfit cover the entirety of the impressive 13 metre by five metre Big Banana icon with 180 litres of a chocolate-syrup.

However passing locals wasted no time calling authorities in fear the local landmark was being vandalised.

“It comes as no surprise that the locals of Coffs Harbour are quite protective of their famous hero, so when a few people spotted our chocolatier standing on top of it, they jumped to the Big Banana’s defence to make sure it was safe!,” Ms Staurt said.

“As soon as the police turned up, they could see that it was all above board and simply the meeting of two great Australian icons. We’re proud to have had the chance to work with The Big Banana in such a memorable way!” Responding police were quickly assured it was all a stunt, timed to coincide with the release of Allen’s latest creation, Mini Chocolate Bananas.

Local police took the misunderstanding in good humour, writing on their Facebook page “Coffs Harbour this morning was the location for the world’s sweetest crime scene…….chocolate coated bananas!!!!”

The Mini Chocolate Bananas are available nationally in Coles and independent stores and retail for RRP $4.50 per bag. They join recent releases in Allen’s Mini Chocolate Raspberries and Milkybar Cookie Bites and KitKat Snak It.