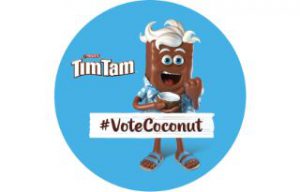 Australia, the power is in your hands when it comes to the next Tim Tam flavour.

Faced with the near-impossible decision of choosing between two delectable flavours, Arnott’s have taken the choice to the polls.

Fans of the iconic biscuit can help the biscuit brand choose between the two equally delicious sounding flavours by casting their vote on the brand’s social media platforms.

And second, but not least, is Tim Tam Coconut Cream, which stars a sweet, creamy coconut cream between two chocolate biscuits, also coated in milk chocolate.

Fans won’t have long to wait, as the winning flavour will hit shelves in an exclusive release in Coles stores this winter.

“There’s no denying that Tim Tam is Australia’s most-loved chocolate biscuit with its uniquely indulgent combination of biscuit, cream filling and chocolate coating. We know that our Tim Tam fans go crazy for new flavours, which is why we wanted to give them the power this time, by asking them to decide on our next new and exciting flavour! And we can’t wait to see what they decide!,” Mr Grant said.

Voting is open now, until June 2.