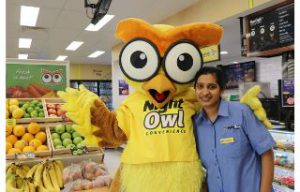 NightOwl are celebrating the reopening of their New Farm store in Brisbane’s northern suburbs, two years after it was destroyed by fire.

The convenience store was razed when the restaurant adjoining the store caught fire in April, 2018. The store had been serving the local community since 1985 and was the first of NightOwl’s now 74 stores to be franchised.

NightOwl Operations Manager and the former franchisee of the store Ian McLauchlan said while it had been a harrowing experience, he was thrilled to see the store back up and running.

“It’s always heartbreaking to see any small business destroyed in such a way, but I owned this particular store for just over 20 years, so the loss was a little more personal,” he said.

“I’m delighted to see the store re-opened and am looking forward to assisting the staff in rebuilding the business, and re-establishing relationships with the residents of New Farm. This new store is well setup to provide value for money coffee, hot food, fruit and vegies, and groceries. I’m sure it will become the successful business that it once was.”