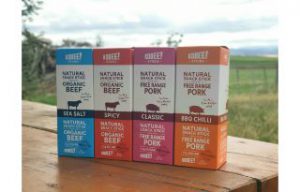 Beef jerky fans have a new, healthier way to indulge thanks to Kooee! Sticks, the latest product from Kooee! Snacks.

The brand, described as Australia’s leading healthy jerky brand, has just launched their latest twiggy stick in stores and promise the high protein snack is even healthier.

The sticks come in three flavours: a free range pork stick in Classic and organic beef sticks in Sea Salt and in Spicy and all are either organic, grass-fed or certified free range and feature all natural ingredients, less than 1g of sugar and are preservative, gluten and soy free.

Co-founder of Kooee! Shaun Malligan said the brand wanted to give the twiggy stick a much needed update.

“Who remembers going to the local deli and asking mum or dad for a bag of twiggy sticks to snack on for the ride home? That was my childhood 30 years ago, and funnily enough, things haven’t changed a whole lot since – twiggy sticks still look the same, taste the same and have the same “mystery” ingredients as they did when I was a kid,” he said.

“I now have two kids of my own, and not surprisingly, they have inherited their dad’s love of twiggy sticks. However, it was only when I looked at the ingredient list of one of these twiggy sticks that I realised they are actually full of junk: mystery ingredients and artificial flavours.”

The sticks are currently available in Woolworths stores across Tasmania and will launch nationally in independent stores next month. A fourth flavour, BBQ Chilli Pork will also launch later this year.