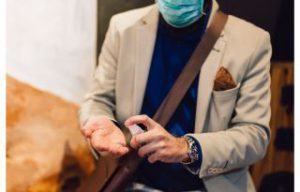 Hoaders attempting to sell their stockpile of hand sanitiser, toilet paper and other essential goods at inflated prices are having their ads pulled from eBay, Gumtree and Facebook.

It come as supermarket shelves across Australia have been stripped of the now-premium goods, leaving many vulnerable people, including the elderly and health workers, unable to access hand sanitiser, which is critical to preventing the spread of Covid-19.

Those looking to profit from the temporary stock shortage by on-selling their stash at significantly inflated prices are being barred, with the online selling platforms agreeing to a request from the ACCC to remove all relevant listings.

ACCC chairman Rod Sims told Sky News the federal police would also be investigating those who are profiteering, stating:

““There have been a lot of people buying goods and then trying to sell them online and we’ve worked with all of the platforms, Gumtree, eBay, Facebook to get them to take down ads for sanitiser and toilet paper where they are tyring to mark them up at ridiculous prices,” he told the network.

“Closing down the websites has made a big difference and minister (Peter) Dutton has got the federal police on to this as well.”

A spokesperson from Gumtree said the site operates a report and take down process and encourages users who notice these ads to alter them via their ‘report ad’ function.

“As a community marketplace, demonstrating respect and sensitivity to our users is of huge importance to us. To curb pricing practices that run counter to the community-minded spirit of Gumtree, from Friday 20 March, Gumtree has been temporarily banning listings for health care masks, including N95/N100 and surgical masks, hand sanitiser/gel, disinfecting wipes and toilet paper.”

It’s also hoped the NSW government’s relaxation of trading laws to allow supermarkets and pharmacies to trade 24/7 will ease shortages.

And some supermarkets are starting to see more replenished stock, following drastic measures by retailers, including reduced opening hours, reserving the first hour of trade to the elderly, vulnerable and in Coles’ case, to emergency service and health workers.

In addition to new conditions announced by Coles earlier this week, Woolworths have followed with their own significant changes.

From today, 41 Woolworths stores will trade only between 11am-6pm to allow the retailer to increase online delivery services to priority assistance customers, those who have a disability or compromised immunity and those in mandatory isolation.

They are also offering support to OzHarvest, Foodbank and Farehare and facilitating the delivery of toilet paper to the elderly via Meals on Wheels.