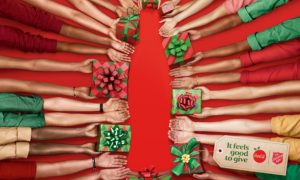 Coca-Cola Australia has today launched its ‘It Feels Good to Give’ Christmas campaign, in partnership with the Salvation Army, for the second year. Following a successful debut in 2017, the campaign will again star the Christmas truck which will tour the country on a 10,000km national tour of cities and towns.

Coca-Cola’s ‘It Feels Good to Give’ tour aims to remind people how good it feels to give at Christmas, creating experiences where communities and families can come together to celebrate the festive season. The integrated marketing campaign will feature a TVC, online video, PR, social media, shopper, out-of-home and experiential.

Kicking off with a launch event this evening in Sydney today, Coca-Cola will transform Tumbalong Park in Darling Harbour into a Christmas pop-up, featuring the world-famous red truck. ARIA Award-winning Australian singer Samantha Jade will perform Christmas carols at the launch and support the tour on her on social channels.

Exclusive to Australia, the truck tour will feature a nationwide Secret Santa – one of the biggest gift exchanges the country has seen. Every visitor who comes to a truck tour stop, will be able to take part in the fun and enjoy Christmas carols and festive meals. The truck will visit twice as many stops this year – including Sydney, Perth, Adelaide, Broken Hill, Melbourne and Hobart finishing at Woolworths Carols in the Domain on December 22.

Coca-Cola will this year make a $500,000 contribution to The Salvation Army to help provide meals and services to people who need it most this Christmas.

Lucie Austin, Marketing Director at Coca-Cola South Pacific said: “We’re thrilled to launch our festive campaign with The Salvation Army for the second year running. It’s a campaign that spreads joy through community engagement and reminds us just how good it feels to give back.

“Bringing the legendary Coca-Cola Christmas Truck back down under was a no brainer after the stellar success and impact it made last year. We hope Australians will come along to enjoy the experience and help us spread the festive spirit.”

In addition to the truck tour, digital OOH panels will be live in Westfield over the holiday season and a bespoke design on the Coca-Cola Kings Cross billboard. There are also limited-edition Christmas packs available to build awareness of Coca- Cola’s partnership with The Salvation Army. To further drive engagement, the festive packs feature a QR code which consumer can scan to unlock festive content

Bespoke design on the Coca-Cola Kings Cross billboard.
For more information about the campaign and to follow the truck’s journey live visit www.coca-cola.com.au or on Facebook at https://www.facebook.com/CocaColaAustralia/