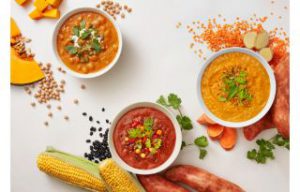 Heinz has released a new range of plant-based protein soups to get you through winter.
Following the trend towards vegetarian and flexitarian diets, the soup giant has released a Plant Proteinz range of soups, saying they’re taking ‘the pork off our forks’ and ‘have no more beef with this plant packed approach to nourishment’.
According to research group Roy Morgan, close to 2.5 million Australians (12.1% of the population) are following diets that is fully or mostly vegetarian. This is up from 2.2 million in 2014.
The range has six new flavours: 7 Veg with Quinoa; Moroccan Style Chickpea with Smoked Paprika; Mediterranean Style Tomato Soup with White Bean and Parsley; Lentil and Roasted Sweet Potato Dahl with Ginger and Turmeric; Mexican Style Black Bean Soup with Sweet Potato and Coriander; and Creamy Coconut, Pumpkin and Chickpea.
All flavours pack 15g of plant-based protein per serve and come in a convenience friendly single-serve pack size.
The range is available now in Woolworths and select IGA stores.