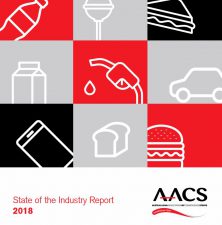 The Australasian Association of Convenience Stores has released its annual State of the Industry Report.

The AACS State of the Industry Report was launched to AACS members and showed revenue generated through in-store merchandise sales last year was up a significant $201 million on the 2017 result.

AACS CEO Jeff Rogut puts the outstanding result down to the efforts of leading convenience operators to evolve their offer to meet changing customer needs.

“To record such a strong result in a challenging market is a credit to the leading retailers and suppliers in our industry to adapt their offer in a way that resonates with their customers and reinforces their value proposition,” Mr Rogut says.

“On the basis of this result and the innovations happening in stores and down the supply chain, we have every reason to remain confident in convenience.”

Speaking at a breakfast launch in Sydney Mr Rogut said there was confidence in convenience, and that was food was the future of the industry.

“If you look at what’s happening within the industry, you can take heart from those two statements because they are very valid,” he said.

“By and large, with what’s happening in the industry there is some good news but we cannot be complacent given whats happened around the industry with suppliers…and retailers undergoing tough times.

One of the bright spots highlighted in the AACS State of the Industry Report is the performance of the food and beverage category which continues to show growth in the convenience channel in terms of merchandise sales and margin.

Food and beverage merchandise outperformed growth of non-food categories for the fourth successive year, recording $3.8 billion in sales, up $101 million or 2.7% over the 2017 result. Non-food still showed growth of 1.9%, representing an increase in sales of $90 million to total $4.8 billion.

“The strong food and beverage result is a reflection of the work done by many of our retailers and suppliers over many years. The efforts by the leading operators in convenience to position themselves as a viable and healthy food shopping option for busy consumers is being rewarded,” Mr Rogut said.

Looking at individual categories, convenience stores’ success in becoming a coffee destination has been reinforced with the hot dispensed beverages category growing an impressive 14.6%, while take home food was up 10.1% in merchandise sales in 2018.

Tobacco is still a very important legal category for convenience stores, with the contribution of legal tobacco sales to the overall mix increasing in 2018 to 39.5%.

“The AACS is focused on protecting the convenience industry’s share of legal tobacco sales while seeking reform in areas including the development of an appropriate legal framework for the sale of e-cigarettes and other stop-smoking devices through convenience stores, and cracking down on the scourge of illicit tobacco being sold in communities around Australia,” Mr Rogut said.

The value of tobacco sales grew $204 million in 2018 – growth of 6.4% over the 2017 result – as the industry saw changes in shopping habits with consumers increasingly switching to smaller pack sizes to combat regulated price increases.

One retailer quoted in the AACS State of the Industry Report had this to say: “Tobacco continues to grow as a percentage of sales value however, a significant amount of that is excise tax increases. The increase in price is causing shoppers to switch to smaller pack sizes.”

Last year, the (then) Turnbull Government announced plans to recover revenue an estimated $900 million per year by cracking down on illegal tobacco, and updated research from KPMG suggests the crackdown may have started to have an impact as Illicit tobacco consumption accounted for 14.1% of all tobacco usage, down from 15.0% in 2017.

Fuel theft on the rise

The AACS State of the Industry Report shows petrol theft, which had been on the decline over the last two years, spiked again in 2018 as the increase of the average price of fuel rose over 11%. Theft increased by 4.4% to now cost the average convenience store $169.67 in losses each week.

“Petrol theft crimes now cost the industry as a whole $58.5 million in financial losses each year. This is unacceptable and reinforces the urgent need for a more coordinated response from law enforcement authorities and the judicial system to enforce a zero-tolerance stance against people who commit crimes against convenience stores,” Mr Rogut said.

After a 10.1% increase in fuel prices in 2017, the industry again had a significant average price increase of 11.3% in 2018, equating to a 24c per litre increase over the last two years or an extra $8.63 per transaction based on the average of 36 litres per transaction.

Looking to the future, the report identifies numerous opportunities and challenges for the convenience sector, from the need to prepare for potential declines in fuel-based customers, to the rise of e-commerce, the growth in small-hybrid format stores, investing in frictionless and automated experiences, the development of electric vehicles, and changes in the various costs of doing business.

“We recognise over the next five years the changes coming to retail and leading convenience retailers are already looking at ways to improve their offer to stay relevant,” Mr Rogut said.

“As an industry we need to embrace change in terms of the merchandise we sell, the customers we appeal to, the technology we use and may need to use, and more. There are elements of disruption upon us in many spheres. Data analytics will play an increasingly influential role. There are regulatory changes that may be imposed upon us as we tackle another election year.

“It is important that our industry not only embraces change, but in some areas drives the changes needed to survive, grow and profit.”

The complete AACS State of the Industry Report 2018 is available to AACS members as part of their membership in the ‘members section’ of the AACS website, and for purchase by non-AACS members for $2900.00 inc. GST.