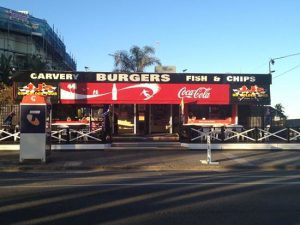 A convenience store in Tugun on the Gold Coast was held up on Monday night.

A man walked into JJ’s on Golden Four at around 7.30pm and threatened the female store attendant with a metal bar.

He demanded cash and, when it was supplied, is believed to have fled to a nearby car.

Store manager Tracey Schaesser said “It all happened quickly. He was very quiet and casual. He came in wearing a big black hoodie, thick woollen ski gloves and a blue surgical mask. He grabbed my staff member and held something up to her throat. I was there too because it was only her third shift so I handed over the money.

“We have CCTV footage of him walking past and waiting until the store was empty to come in. The police have that footage now and they think they know who it is. Apparently there is a gang working in the area – there have been five hold ups in five days. My advice to other local business people is to keep the till as empty as possible,” said Ms Schaesser.