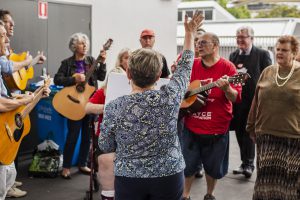 Today’s launch hosted people currently affected by homelessness and using Vinnies services. Metcash volunteers were on hand to give out a selection of BBQ food supplied by IGA. Metcash volunteers also received a tour of the Matthew Talbot Hostel and Ozanam Learning Centre giving them first-hand experience of the important work that Vinnies does for people throughout the year.

Sydney Street Choir serenaded every BBQ diner with hit songs from various decades. The choir was set up in 2001 to help men and women dealing with homelessness, mental illness, addiction and/or social disadvantage through the power of song.

Speaking at the event, Vinnies NSW ambassador, Belinda Russell said, “I’m incredibly proud to be a part of the St Vincent de Paul Society’s Christmas Appeal. Vinnies says, ‘Christmas without joy is not Christmas at all’ and it’s so true. Vinnies and IGA are all about helping those who need it the most and at Christmas time that’s when we need to do our little bit to spread that Christmas cheer.”

Warren Mason, retailer of IGA Woonona and member of the IGA NSW State Board, said “As IGA retailers, we believe in supporting all members of the local community. Organisations like Vinnies provide vital services for some of the most vulnerable members of the community. Supporting Vinnies and their work and making sure that their services are well funded, especially at this time of year, is essential.”

Since 2012, independent retailers from IGA across Australia have donated over $1.5 million as part of the retailer’s continued support of Vinnies and their dedicated work in helping those most in need during the festive season. The funds raised by generous customers and IGA staff have helped Vinnies provide food and vital support to thousands of people experiencing homelessness and disadvantage across Australia.

Jack de Groot, CEO of St Vincent De Paul Society NSW thanked IGA retailers for embracing the true spirit of Christmas and supporting the cause because it will make a huge difference to the people Vinnies assists.

“Christmas can be a challenging time for many in our community who will struggle with basics like food and clothing, finding a safe place to sleep and isolation. We are very grateful to IGA’s ongoing support as it allows us to help even more people struggling to make ends meet.  Your vital support in buying a Vinnies Bauble from IGA stores across the country for just $2 allows Vinnies to continue to rebuild lives and give the gift of hope for a brighter New Year.”