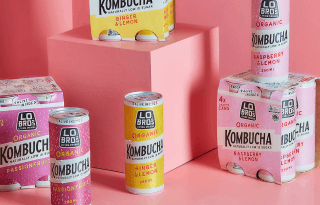 And excitingly for consumers, due to the longer fermentation process for the canned products, they don’t require refrigeration. Making for an easy, on-the-go option this summer and a handy way to look after your gut during the party season.

“We ferment the kombucha in our cans for a little longer so they contain less than a gram of sugar, which means they can be stored in and out of the fridge while still being filled with living goodness,” Soulfresh CEO Didi Lo said.

The cans also include a breakdown of their sugar content, explaining to consumers the role it plays in maintaining the product’s probiotic content.

The range of brightly coloured cans feature a 250ml slimline design and join the brand’s line of 300ml and 750ml glass bottle kombucha.