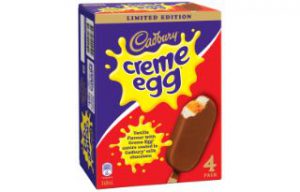 For many, it’s not Easter until you’ve had a Creme Egg – and this year there’s a new way to indulge in the treat.

It follows other successful Cadbury/Peters releases in Picnic, Crunchie and Dairy Milk ice cream creations. And the previous release of a Creme Egg ice cream tub.

The iced-treat is sure to be a hit given Australia’s love of ice cream – a Mintel research survey found we’re the second biggest global consumers (second only to Norway) and consume a whopping 9.4 litres per capita.

A C&I report from 2017 predicted the growth trend towards inventive flavours and premium ice cream offerings, particularly in take-home tubs.