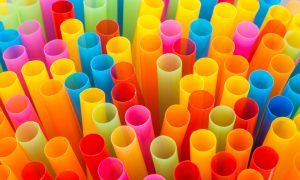 Plastic straws, drink stirrers and cotton buds are on their way to being banned in the United Kingdom by Prime Minister Theresa May.

However no such ban has been promised in Australia.

In a bid to stop pollution, Ms May has laid out plans to band single-use plastics.

Mr Turnbull was visiting London for the Commonwealth Head of Government Meeting, and would not commit to banning single-use plastics in Australia.

Mr Turnbull told reporters: “The banning of plastic bags and other items of plastic has been debated in Australia over many years; it’s largely a matter of state regulation, the Productivity Commission has had a look at it, it’s something that will come up for review”.

“It’s not a simple matter, because it can impose additional costs and can create additional pollution, so the important point is to ensure plastic waste does not find its way into our oceans.”

The UK has already banned microbeads and cut down on its plastic bag use.