Prime Minister Scott Morrison and Premier Steven Marshall visited the site to officially open the European manufactured production line. Bickford’s owner Angelo Kotses conducted a tour of the facility where the newly operational equipment delivered some of the first Bickford’s products through the system.  These products will be hitting shelves around the country in the coming weeks. 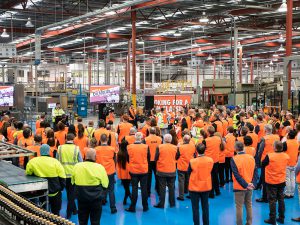 PM Morrison said he was thrilled to get this invitation. “Bickford’s is a truly great Australian brand – one in 25 Australians buy Bickford’s each week which goes to show how loyal consumers are,” said Morrison. “What is being done here is great for manufacturing – the future of Australian manufacturing is this high quality,” he said.

Kotses said the company was building a legacy that was born in South Australia. “This fantastic new technology enables us to take South Australia and the Bickford’s brand to the world – that makes me very proud,” said Kotses.

Bickford’s Iced Coffee syrup celebrates its 100–year anniversary in November this year, and the new technology provides the company with an opportunity to expand on its range.

Group Marketing Manager, Chris Illman said the company was excited to create an Iced Coffee ready to drink option: “We’re delighted to confirm that we will be launching three new products in this space in the coming weeks with an exciting programme of activity.”