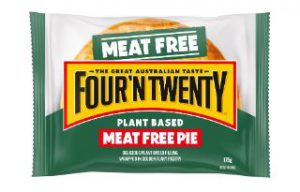 It’s a footy staple, beloved by tradies and a go-to-snack for countless Australians.

But the humble meat pie has just been given a major shake up by Four’N Twenty, who have released a very on trend line with a brand new plant-based filling.

And it seems there’s already plenty of buzz, with news of the pie circulating across vegetarian social media groups before there had been an official company announcement.

It’s not just vegetarians welcoming the addition, with the increasing number of ‘flexitarians’, those looking to cut back on their meat consumption, are also expected to take a big bite.

And they are a large group – data from researchers Roy Morgan estimates more than 2.5 million Australians are eating either no meat or a mostly plant-based diet.

It’s also been given the ultimate footy-snack endorsement by Four N’Twenty, who will bring it to the MCG in April.

“We recognise that more Australians are substituting meat with plant-based foods in their diet. Our research found that 53% of consumers are reducing or eliminating meat from their diet, so it made sense to create Four’N Twenty’s first ever Meat Free pie for those on a plant-based diet. The ingredients within our new Meat Free pies contain no animal products,” Patties Foods general manager of marketing and innovation Anand Surujpal said.

“We continue to celebrate the diversity of our customers by meeting their evolving preferences. We’re always looking for new, innovative ways to make Australia’s original fan food suitable for even more people.” Whether you’re enjoying meat-free Monday or Friday pie-day, footy fans, vegetarians and flexitarians can all enjoy the great Australian taste.”

The pies will be available in Coles supermarkets and Coles Express stores from the end of March and Woolworths, BP and independent supermarkets, as well as petrol and convenience stores from April.