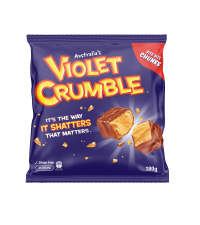 Having returned to Australian ownership in 2018, iconic confectionary brand Violet Crumble is now available to purchase in bag format. This much-loved chocolate snack will be available in bags in a number of independent outlets across Australia for the first time in nine years.

A long-regarded Aussie favourite, Violet Crumble’s return to Australian hands was met with momentous enthusiasm last year. It is now produced in Adelaide by the fourth generation, family-owned Robern Menz, which is one of the largest Australian owned confectionery businesses, and the largest manufacturer of honeycomb in the country.

This new format will appeal to the many fans who fondly remember the bag – which comprises bitesize miniature versions of the chocolate bar. The 180g bag will be available in a number of independent retailers across Australia, including Metcash. It provides an alternative option to the existing 50g Violet Crumble bar, perfect for sharing, whether at the cinema, on the couch, in the office or on the go.

CEO of Robern Menz, Phil Sims comments: “There’s been huge consumer demand for the return of the Violet Crumble bag since it was withdrawn nearly a decade ago, so we’re thrilled to be able to bring this format back. It’s a great choice for those wanting to share the snack with friends, or exercise some portion control if they don’t want to indulge in a 50g Violet Crumble bar.”

The Violet Crumble bag format was withdrawn by previous owners, Nestlé  in 2010, and Robern Menz was eager to reintroduce it when it began production from its Adelaide factory last year, seeing it as an opportunity to not only delight existing fans, but introduce it to new ones.

Sims continued, “We’ve been inundated with enquiries from customers wanting to bring the bag back, but having been off the shelves for a decade, there are many people out there who have never tried it. It’s a real privilege to have custody of such an iconic Australian brand so by rolling it out in different formats we can offer more choice and flexibility for people to enjoy Violet Crumble however they want to.”

The 50g Violet Crumble bar is currently available throughout Australia in major supermarkets, independent retailers and convenience stores.  For information about stocking the bag or any other products in the Menz range please contact Andrew Antoniou 0417 418 219