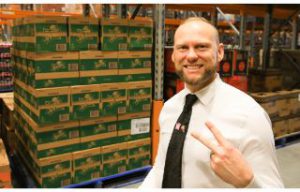 Drakes Supermarkets director John Paul Drake didn’t hold back on his feelings towards stock-hoarders in a video posted to his YouTube channel this week.

The son of the independent supermarket chain’s founder, Roger Drake – who C&I recently profiled for Face Time, unloaded on a customer he said attempted to return a whopping 150 units of 32 roll packets of toilet paper and 150 1L bottles of hand sanitiser.

In the video, which has since been viewed more than 253,000 times, Mr Drake said panic buying had caused significant challenges for retailers across the country. Drakes, he said, had sold eight months worth of toilet paper in just four weeks and a year’s supply of flour in nine days. And he said many people would now be sitting on more stock than they’ll ever be able to cosume.

Before adding he had flipped the bird to the customer seeking a refund on the bulk purchase.

“This is the sort of person who is causing the problem in the whole country,” he added.

Comments on the video have been overwhelmingly supportive, with many thanking Mr Drake for refusing to give in to the hoarder.

It comes as signs the panic-buying induced product shortages begin to emerge. Including a report in the Sydney Morning Herald this week that the Commonwealth Bank has reported a sharp decrease in consumer spending over recent weeks.