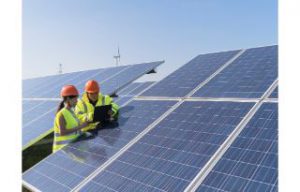 Coca-Cola Amatil Australia will soon be a step closer to their renewable energy target, with 5,200 solar panels set to be online by the end of summer.

The panels, which will cover 8,516 square metres of their Eastern Creek distribution centre, will generate 2,400MWh of electricity per year, according to the company – which they say equates to powering 400 homes or 63,000 LED street lights for a year.

The panels are expected to be operational in the coming months.

Coca-cola Amatil Australia managing director Peter West said it continues the company’s commitment to “generating low-carbon and renewable energy equivalent to 60 per cent” of their operations (they’re currently at 56%) and was a positive move both environmentally and financially.

“Bottling is energy-intensive, and we rely on the power grid to reliably manufacture and supply Australia’s most popular beverages. It’s fair we contribute back to that grid through low-carbon and renewable sources like this solar panel array,” he said.

“Inputs from the array are also expected to cut Amatil’s energy costs by hundreds of thousands of dollars at Eastern Creek and reduce our electricity usage from the local grid by 14 per cent. So this switch to solar is good news for sustainability and a good commercial outcome for the business.