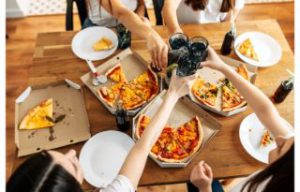 It’s hard enough being on lockdown in the middle of a major city, let alone in the isolation of the Australian outback.

Luckily, struck with a little ingenuity and access to a light plane, one Outback Roadhouse has become the local saviour to those in lockdown, flying in the ultimate in comfort food: warm pizza and cold beer.

The ABC reported last week that The Dunmarra Wayside Inn in the Northern Territory, roughly 300km south of Katherine, had been literaly going above and beyond for customer service.

Pilot Gary Frost told the national broadcaster that he’s taken to the skies in a fixed wing plane to bring a little community spirit to the ‘locals’ – those located up to 100km from the Roadhouse, while they were on lockdown due to Covid-19.

“Nobody can go anywhere, they’re limited to how they get their supplies and refreshments,” Mr Frost told the ABC.

“So we thought we might do something to help them out a little bit.”

Better yet, the ABC reported the prices weren’t hiked, despite the considerable effort in delivering the goods, and the restaurant had plans to make an occasional extended trip to stations up to 400km away.