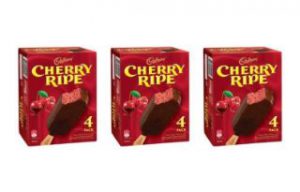 Clear out your freezers, one of Australia’s favourite chocolate bars is now available as an ice cream in a very exciti

The packs of four stick ice creams are available now in Woolworths, Coles and selected IGA supermarkets and retail for $8.50 per pack.

Cadbury have also released a Cherry Ripe flavour to their Old Gold chocolate block range, which is also available in supermarkets now with an RRP of $5.