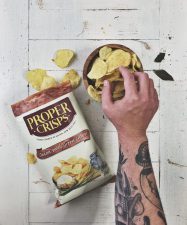 Proper Crisps Head Cultivator Duncan Kerr said: “After lots of requests from Australian consumers, Proper Crisps is excited to be launching into Australia with the first containers arriving in March”.

“We have partnered with a fantastic distributor over there – Better Foods Distribution – and we will be selling in NSW and VIC. We have supplied some co-branded product via Oliver’s Real Food and the feedback on our Crisps have been really positive.”

“Ultimately, we are about producing the best crisps we can using all natural ingredients that customers love.

“The benefit of making a great tasting crisp is they are a little bit more healthy with less fat and sodium but also Vegan and gluten free.

“We are really excited to be launching in Australia and we look forward to building our reputation over there,” Mr Kerr said.