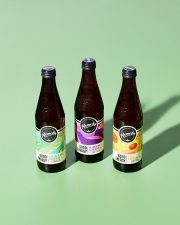 Research conducted by Remedy Drinks, makers of Australia’s top-selling range of tasty live cultured drinks, has discovered that two-thirds of millennials have tried kombucha with over a third drinking kombucha regularly, however a surprisingly high number are also still drinking sugar and chemical-laden energy drinks.

Remedy’s research found that 62% of millennials who had consumed kombucha in the month prior to the research had also consumed energy drinks in the same time.

“On one hand, people are going with their gut and drinking kombucha but then also smashing a few energy drinks on the side. So we decided to make it right and develop an energy drink that’s actually good for your mind, body and gut,” explained Emmet.

The launch of the all-natural, no nasties, no sugar energy drink – Remedy Good Energy – continues the Remedy tradition of shaking fizzy drinks up for good with this brand new fizzy believed to be the world’s first kombucha-based energy drink.

“Remedy Good Energy contains all the goodness and benefits of kombucha including live cultures, organic acids, and antioxidants with the added good vibes and good energy buzz of raw green coffee bean extract, green tea and ginseng for a smoother, more enduring real energy kick minus the nasties,” said Emmet.

“Until now, there hasn’t really been a healthy, tasty alternative to traditional energy drinks. Remedy Good Energy is a market first and one we think people will jump onboard with having already been bitten by the Remedy booch bug,” said Emmet.

Like the Remedy drinks you already know and love, Remedy Good Energy naturally contains no sugar, with an official tick of approval from Sarah Wilson’s I Quit Sugar.

“Traditional energy drinks can contain more than 10 teaspoons of sugar per 500ml can. Remedy Good Energy contains none,” said Wilson.

“A naturally no sugar, kombucha based energy drink is a first and it’s great to see Remedy continuing to put their heart and soul into developing new products that will actually give people a healthy option when they need an energy boost.”

“People are literally busting a gut to get ‘it’ done. Remedy Good Energy is a good option when the 3pm slump rolls around, if you are on deadline for work or uni or even if you’re out late socialising.”

Remedy Good Energy is available from Woolworths from 20 May 2019 and online at remedydrinks.com. RRP is $4.50 for a 330ml glass bottle.