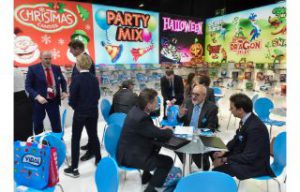 Organisers of ISM, the international sweets and snacks trade show, have announced that more than 37,000 trade visitors attended the four-day event in Cologne, Germany.

This was the 50th edition of ISM, which, once again, highlighted its importance to the global sweets and snacks market.

Gerald Böse, president and chief executive officer of organiser Koelnmesse, said: “In its anniversary year, the leading global trade fair for sweets and snacks is once again bringing all of the internationally relevant market participants from the industry and trade together in this magnitude and is thus confirming its function as the most important business hub, export driver and innovation platform for the sweets industry.

“The top decision-makers from all over the world meet up in Cologne in the space of just four days.”

Foreign exhibitors accounted for 87.5% of the companies showcasing products at ISM, highlighting the ‘internationality’ of the trade fair in bringing together industry leaders travelling specifically for network and see new products.

Bastian Fassin, chairman of the International Sweets & Biscuits Fair Task Force and member of the board of the Federal Association of the German Confectionery Industry, said that ISM is indispensable for the sweets industry.

“With its numerous innovations, it brings new dynamics into the national and international trading activities of the market leaders and the medium-sized companies year after year and thus sets important impulses for the future for the entire industry,” Mr Fassin said.