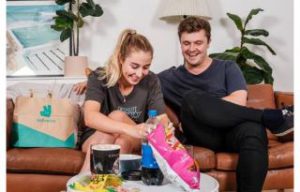 There’s even more chances to fix your late night snack cravings or save tomorrow’s breakfast – and you don’t even have to leave the couch.

BP Australia have expanded their Couchfood home delivery service to 120 stores after partnering with Deliveroo.

Launched last year (initially available through UberEats), the on-demand service allows customers to order sweet and savoury snacks, beverages and ice cream – as well as selected kitchen staples such as milk and bread, through the Deliveroo app.

Research by BP last year found it was likely to tap into the millennial market, finding a quarter of those aged 25-34 ordered from a meal delivery app at least once a week.

BP’s general manager of marketing and retail innovation Adam Arnold said the expansion was in response to consumer demand.

“Couchfood™ is revolutionising summer snacking by bringing seasonal favourites and a wide range of sweet and savoury snacks right to Aussies’ doors. It’s great to be working with Deliveroo and we look to continue building the Couchfood™ by BP brand throughout 2020,” Mr Arnold said.

A full list of participating stores can be found at bp.com.au/couchfood.