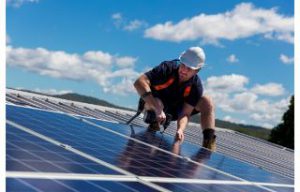 Shell are the latest fuel giant to look to greener energy sources, announcing plans to build an industrial-scale solar farm in central Queensland.
The farm, near Wandoan in the Western Downs Region, will have feature 400,000 photovoltaic panels with the capacity to generate 120Mw of solar power.
It’s expected to be up and running by early next year.
Shell Australia chairman Tony Nunan said QLD was the perfect location, both for its reliable sunshine, and as Shell’s existing QGC onshore natural gas project is in the region. And added he believed solar will play an increasing role as a global energy source.
“We are proud to be investing in the ‘Sunshine State’ and Queensland is a key centre of activity for Shell’s global ambition to expand our integrated power business. Shell’s Gangarri solar farm will help power the operations of our QGC project and reduce carbon dioxide emissions by around 300,000 tonnes a year,” Mr Nunan said.
Construction of the farm could generate up to 200 jobs, including electricians, machinists and operators.
The announcement follow’s Shell’s purchase of a 49% stake in ESCO Pacific, a solar farm developer and acquisition of ERM Power Limited, both in December.